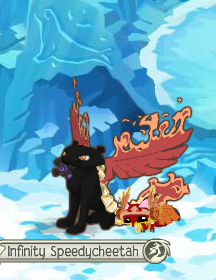 The battle was ferocious. Red marks still stained the white ground. There were scuffs in the ground from the fighting and blobs of purple were dripping everywhere. Harper stood on the remains of a giant phantom, still tense, still waiting for the phantoms to launch another unexpected attack. “You can not win!” She shouted into the wind, “this place is mine and I will never give it up!”

In a place where light would never reach, the Phantom King glowered angrily. “Why does Mt Shiveer still not belong to us?!” He roared at his fellow phantoms. “Why does this Shaman continue to resist us?!” “Um sir, please sir, we could, perhaps sir,” stammered one phantom, “we could maybe, cease all action and…” “What?!” Thundered the giant phantom, “stop trying to conquer the Great Ice-lands of the North? Stop our mission, our one great duty on this world? Tell me why, you puny excuse for a phantom, tell me why you think we should cease our attack?!” There was a long silence after he had finished, a pause that was so long you could’ve almost felt the fear, anger and shame in the air. “Erm, maybe because then we could, we could then make the Shaman think we have given up and then when she least expects it we could, maybe, attack with the full force of our army?” “Hmmm,” the Phantom King grumbled in an unusually quiet tone, “hmmm, that could work, but I have a few other ideas.” “Ok, ok,” stuttered the little phantom, “what ever you say my lord, you are always right, I’ll just leave now and let you…” And with that the phantom was gone, leaving the Phantom King to think about his new, evil plan.

Yay! First chpater of Harper's Last Stand. It's my own story of Harper the seal Alpha and what happened to her. Check my Wolves and Panthers blog for the prologue.
Ok, so I have started my Lgends of Jamaa on my Razor blog website so to read the last few you will need to go there,
here is a link that will take you straight there!
Wolves and panthers
animal jam
Powered by